Rose Borchovski's "Why Is It Hard To Love!"

I want to do a quick post about the Rose Borchovski aka Saskia Boddeke show that ends today, darn it!, at PAD, "Why is it hard to love?" but I just don't have time! But I'll do what I can, because this show deserves more than the words I can give it. 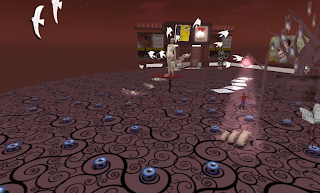 After going, I couldn't stop myself from doing a search like Miso told me to on Susa and Rose Borchovski to find out more of the story on the Susas. Rose apparently started the stories for her daughter. "Susa Bubble, who went to bed single and woke up double." They keep multiplying until there are 33 of them; of course, when it stops and there is no 34, all of them become quite paranoid. There are several installations she has done to tell more parts of the story. A couple of her shows were banned from SL public general areas because she used to make the dolls naked -- can you imagine banning that?!? SL says no nudity in public art shows! Bring out the drapes for David!!!

I have not been able to find a list of the machinima videos in order or even a home page for her in real life. If I find those, I will update this post.

My introduction to the Susas had been through Miso's flickr account images -- she and Wiz had stumbled on an outworld work and the "Build" option had been left on so they did some messing around and took some pics in homage. I knew there was a story behind Susa dolls from what she said about the images, but I had no idea what it was.

Rose uses a lot of religious imagery; I think it is the 4th or so part of the story where the Susas decide they need religion. They elect the original Susa to be their leader/ savior, but Susa Two is never completely satisfied with that. In a story called, "Fears," Susa Two (now calling herself "Judith" betrays Susa One. Looking at the installation after this one, someone was apparently killed.

Why is it when we have so many wonderful visual tools for drawing, painting, making videos, mashing up images, etc. --
there are so few tools for integrating those made things into written text???

Okay, like, MacBook Air.  Comes standard with all those graphics apps -- but you're supposed to write with TextEdit???  For pete's sake.  It was so ridiculous to stop bundling AppleWorks with Macs.

In SecondLife:: don't EVEN get me started about how basic text functions are nigh impossible in-world.  Yes yes yes if you want to see your world through Viewer 2, you can have web-textured prims and use sucky web text apps interactively with all that lag from in-world....

Okay, so this is where I'm going with this when I finally have time to write it!
Posted by Deanya Lattimore Schempp IFL / Deanya Zenfold ISL at 2:49 PM No comments:

Review of Draxtor Despres' "Our Digital Selves: My Avatar Is Me!"