Educators spike in sales? no?

So from Tateru's blog, a pretty interesting chart showing user-to-user transactions from the last year. 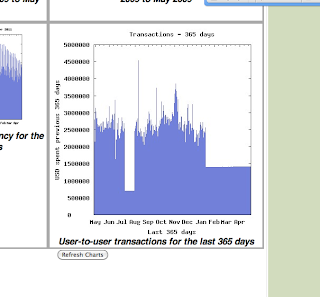 Hmmm.  A serious quick spike in mid- to late August. ...  What COULD that be???  Oh yeah, maybe educators and all of those new students they were bringing in back when they could afford to rent land out of their own pockets for innovative education.

Linden Labs has made some pretty dumb choices where educators are concerned.  Phillip's original hippie philosophy of "no advantage based on money-making affiliation" has been co-opted by the more Republican money-making ethos of the Phillip-less LL and screwed around so much that everyone gets the same crappy deal except for those who know enough to ask for a better one.

If you had a single customer who was getting an average of 50 new people to try your product every three months -- that means an average of 150 new folks who have tried your product, on whom you may now invest ROI dollars to get them to stay -- how much would that be worth to a business?   Apparently it's worth nothing to Linden Labs, despite this additional evidence of hugely increased August sales.

(I did just figure out several reasons why the spike might exist otherwise: the market might have been malfunctioning previously -- I can't explain the flat dip the month previous -- and the sales that did not go through on their original dates might have all been posted at once.  But until informed otherwise, I will believe that educators were making a difference, even in user-to-user sales. which is not a category I would have expected from spend-thrifty teachers.)

Review of Draxtor Despres' "Our Digital Selves: My Avatar Is Me!"